A Lifetime of Original British Drama on the BBC: Trailer Find out more and purchase here

Posted in Behind The Scenes, Benedict Cumberbatch, Magazines

**These aren’t my screencaps, but fun anyway..

Posted in Behind The Scenes, Benedict Cumberbatch

Tags: Behind The Scenes, Benedict Cumberbatch 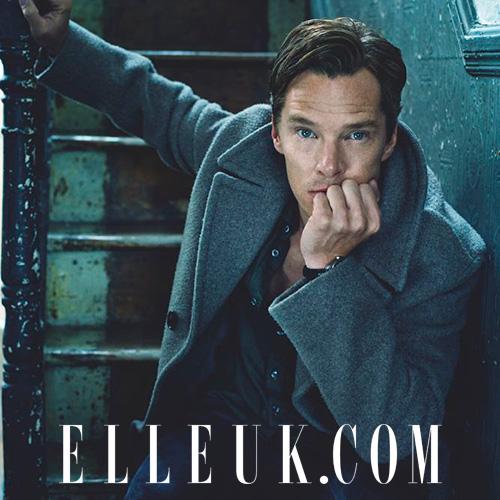 Benedict Frankenstein Behind The Scenes Posted in Behind The Scenes, Benedict Cumberbatch, Frankenstein

You may know by now that Benedict Cumberbatch appears on a collector edition cover of ELLE’s December issue, and in an eight page editorial story. It’s rather special – get it here, and we will post it to you anywhere in the world.

We spent the day with Benedict, 38, rambling around Hampstead Heath, riding his motorbike (a little recklessly) through London, and drinking cocktails at the Chiltern Firehouse. And we talked to him about everything: his work, his childhood, his friendships, his family, love life, Sherlock (of course) and babies.

We’ve had better days at work. We just can’t think of them right now.

On his next film The Imitation Game, in which he plays WW2 code-breaker and founder of modern computer science Alan Turing, he says: “It [genius] is a very rich canvas to work with as an actor. Turing is so different to Sherlock. There’s a real subtlety about him; his flourishes aren’t flamboyant, he doesn’t think of himself that highly.”

On his love life, he is sweetly candid. “It’s a really double-edged sword,” he says, about dating post-Sherlock fame. “You know, you discover why people find you attractive – in a relationship or a tryst – and if it’s just to have a go on you or try you out, then I can smell that a mile off.”

It hasn’t made him cynical though. He is most definitely looking for the fairytale: “I hope I’m looking back and going: ‘Oh, that was the moment I got on with life and realised things beyond myself.’ Without using words like ‘marriage’ ‘children’ and ‘family’ – although I have just used those words – put it this way: I hope I’ve got other people to look back with me at that point. I hope I’m surrounded by family.” He’s a feminist too, you know.

The issue is on sale October 30th. Until then, enjoy this exclusive film we made at our cover shoot. That laugh [at 1:14]…

Now THIS is what a feminist looks like #ellefeminism#BenedictCumberbatch http://on.elleuk.com/1FQ1nGg

Marvel has found their Sorcerer Supreme for the upcoming Doctor Strange film, and it’s Benedict Cumberbatch.

According to Deadline, the actor and Marvel Studios are in final negotiations over the part. The news comes after weeks of speculation over who would take the titular role that Joaquin Phoenix vacated earlier in October. When Phoenix and Marvel were just about to sign a deal, Phoenix backed out of the project. Since then, candidates and rumors appeared across the board, ranging from Tomy Hardy to Keanu Reeves.

Doctor Strange will be directed by Scott Derrickson, with a script from Jon Spaihts. While Marvel has not tied an official release date to film, many suspect that it will take the July 8, 2016 slot that the studio has claimed.

Cumberbatch comes from a strong background in science-fiction and fantasy acting, including a starring role as Kahn in Star Trek: Into Darkness, the voice of Smaug in The Hobbit: The Desolation of Smaug, and Sherlock Holmes in the BBC series Sherlock.

Check back in with Comicbook.com as more information on Doctor Strange is released.

BENEDICT CUMBERBATCH CONFRONTS HIS PENGUIN DEFICIENCY BUT CAN HE SOLVE HIS ADORABLE PROBLEM?

Noted thespian and adorable human Benedict Cumberbatch has an extraordinarily cute history of not being capable of saying the word penguin. It is a history well-documented — in a literal documantary, no less — and well-loved. Like all evolved humans, though, Cumberbatch is constantly looking to better himself. In this case, as evidenced on The Graham Norton Show, that might result in the tragic early death of his penguin deficiency.

Norton confronts Cumberbatch about his love of “pengwings” and “penglings” after the bashful actor tries to remember what his fanbase is called these days. Are they the Cumberlings? The Cumber Collective? It’s something Cumbersome, but it’s also besides the point, because Cumberbatch got even more bashful when the subject of penguins came up. There were producers present, he swears! He didn’t mess it up all by himself! He’s learned so much since those moments!

And yes, Norton does get Cumberbatch to say “penguin” in this video. In other adorable moments, the Imitation Game star reprises his impression of Jar Jar Binks and scares/arouses Miranda Hart with his Smaug voice. I’ve gotta say I’m disappointed Cumberbatch has learned how to say penguin so soon before his Penguins Of Madagascar press tour (the possibilities!), but if he’d just combine the Smaug voice with the pengling thing I think I could forgive him.

Benedict Poses With Himself On Graham Norton Show

Posted in Behind The Scenes, Benedict Cumberbatch, Richard III