Inside Africa: The Children’s Monologues…

Inside Africa: The Children’s Monologues

A CNN Exclusive on this week’s edition of Inside Africa as a cast of Hollywood stars and schoolchildren are united to perform a single script at the same time on two different continents.

Cameras have unprecedented access to rehearsals as Nicole Kidman, Benedict Cumberbatch, Chiwetel Ejiofor, Josh Hartnett, James McAvoy and Game of Thrones star Kit Harrington are among the actors who each have only a 15-minute session with Oscar-winning director Danny Boyle before performing for one night only on a stage at the famous Royal Court Theater in London’s West End.

At the same time a group of drama students in the rural South African township of Ramolotsi are preparing their own version of the same performance – a series of stories written by their fellow pupils about the most dramatic day in their lives.

“Dramatic Need presents The Children’s Monologues” produces laughter, tears and a shared sense of understanding among audiences on two continents and helps the children to use drama to deal with pain and trauma.

Tune in this Friday, December 11.

Posted in Appearances, Behind The Scenes, Benedict Cumberbatch, Documentary

Behind The Scenes Look At Inside Africa…

Posted in Appearances, Behind The Scenes, Benedict Cumberbatch, Documentary

Benedict Monologue For Inside Africa…

Without the sun, life on Earth would be impossible. It provides food for the plants that feed us, and warmth so that we don’t freeze to death. But the sun has a dark side. It is, after all, a giant ball of fire in the sky, whose 27 million degree Fahrenheit surface is tossed about by burning tsunami waves 62,000 miles high. And at pretty much any point, it could burp out rivers of charged particles that could paralyze technology on Earth.

A new documentary premiering tonight asks the question, “What can cause our normally benign sun to erupt in such fury that it can threaten the world’s power and technological infrastructure?” according to a press release.

To answer that question, [Solar Superstorm] takes audiences into the inner workings of our star. It follows the path of hot magnetized gas from deep inside the sun, through its tangled journey through the Sun’s churning outer layers and on to explosive magnetic eruptions so powerful they can affect the Earth.

The documentary is narrated by none other than Benedict Cumberbatch, and it’s based on supercomputer simulations that are making it easier to understand where solar eruptions come from, and how to predict them. Also, it’s gorgeous.

Here’s one clip, below, and the National Center For Supercomputing Applications has four more that you can watch on their site. The full 24-minute documentary will be shown in planetariums and science centers after today.

Benedict Narrates Cristiano Ronaldo: The World At His Feet Documentary 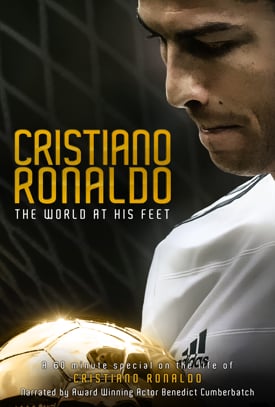 A six-month Guardian multimedia investigation has, for the first time, tracked how some of the world’s big-supermakets, Tesco, Aldi, Walmart and Morrisons, are using suppliers relying on slave labour to put cheap prawns on their shelves. Slavery is back and here’s the proof. Narrated by Benedict Cumberbatch

Warning: some may find elements of this film distressing. Girlfriend In A Coma

**I am not sure what this is, but it has Benedict’s voice listed as “Dante”, whoever that is. So this is a feature from the documentary:

Here is part one of the Van Gogh documentary that was narrated and starred Benedict, will post them all soon: